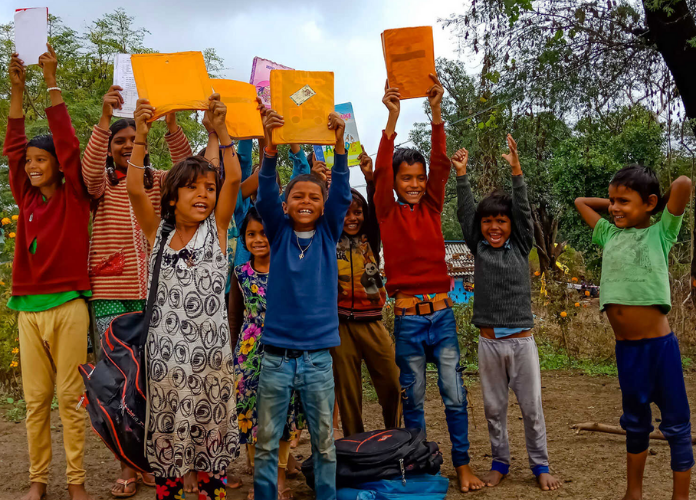 Image: Smile For All

As per the 2011 Census of India, slum families account for 13.7 million people in 63 % of the country’s cities. In urban slums, approximately 22.72 million children are out of school.

Here is how Smile For All is educating the underprivileged

Smile For All in Jaipur is on a goal to return impoverished children to school. Supporters may help slum children to get a great education by purchasing Happiness Subscriptions, which starts at Rs 500 per month.

Smile For All is working hard to bring these kids back in the classroom. SFA is a non-governmental organisation (NGO) founded by Bhunesh Sharma and his wife Neha Sharma with the goal of giving quality school education to impoverished children.

The foundation, which was started two years ago, is working to implement “Happiness subscription,” a public inclusion initiative. They currently operate in over 200 cities across 25 Indian states and also have active social welfare programs in Bangladesh.

They have 623 happiness members and more than 1000 children enrolled in private schools. 100 of these will be funded by RTE, with the balance coming from private sources.

Also Read: Matka Man is on mission to provide free drinkable water to the thirsty

The story behind the foundation of SFA

SFA’s roots date back to the year 2017. When waiting at a traffic signal, Bhunesh, an educator and associate at edtech platform Unacademy, encountered two children. The kids, on the other hand, were not begging for money, but rather for a pen to write with.

Bhunesh decided to drive his car to the closest store, where he bought a pen for the kids. He was encouraged to teach them as a result of this incident.

These children switched to a new slum the following year, but Bhunesh remained to educate them. Others quickly joined the classes.

Bhunesh took out a Rs 1.5 lakh loan and registered 40 children in school through the Right to Education programme (RTE). A total of 15 of them were placed at a private school. As news got out, other parents asked Bhunesh for assistance in getting their kids to school.

Taking out a loan was not a viable choice for Bhunesh in the longterm. Bhunesh and Neha founded Smile For All in February 2019 with the goal of encouraging public participation and promoting openness in the child welfare field.

After that, the pair began devoting their evenings to teaching children from the slums. Neha tutored almost 80 pupils at one point.

To soothe their concerns, Bhunesh and Neha trained children in the slums, in which the parents could unwind.

SFA has reached out to and performed educational assessments in 100 slum regions across India with the help of roughly 4,000 volunteers.

SFA’s core group and supporters seek to raise consciousness about the situation of children living in slums, as well as the necessity of quality education for poor people.

Convincing the parents was a major task

Parents are also counselled by the team, who assure them that their children will be secure and welcomed in their new school.

They are also engaged in enrolling children into private schools either via RTE or paying their school fees through Happiness subscriptions. Most of the time, they have had to negotiate with and request principals to accept students by lowering their fees.