“Smile For All” spreads Happiness amongst Gloom

What would most of us do when we see a child come begging to us at the red light? Probably shoo them off. We have all been there.But there are anomalies everywhere. Bhunesh Sharma, the founder of Smile For All is one such exception to the rule! One day in 2016, Bhunesh had little idea that his life was about to change. Two kids with notebooks under their arms walked up to his car as Bhunesh waited for the signal to turn green.

Unlike most homeless kids, they were not begging for alms. Instead, they were asking for something to write in the notebook with. Bhunesh drove his car to the nearest kiosk to purchase a pen and then straight back to the kids. This incident stirred something inside him. He decided to tutor the children. He spent his evenings with them at a nearby garden teaching them how to read and write. 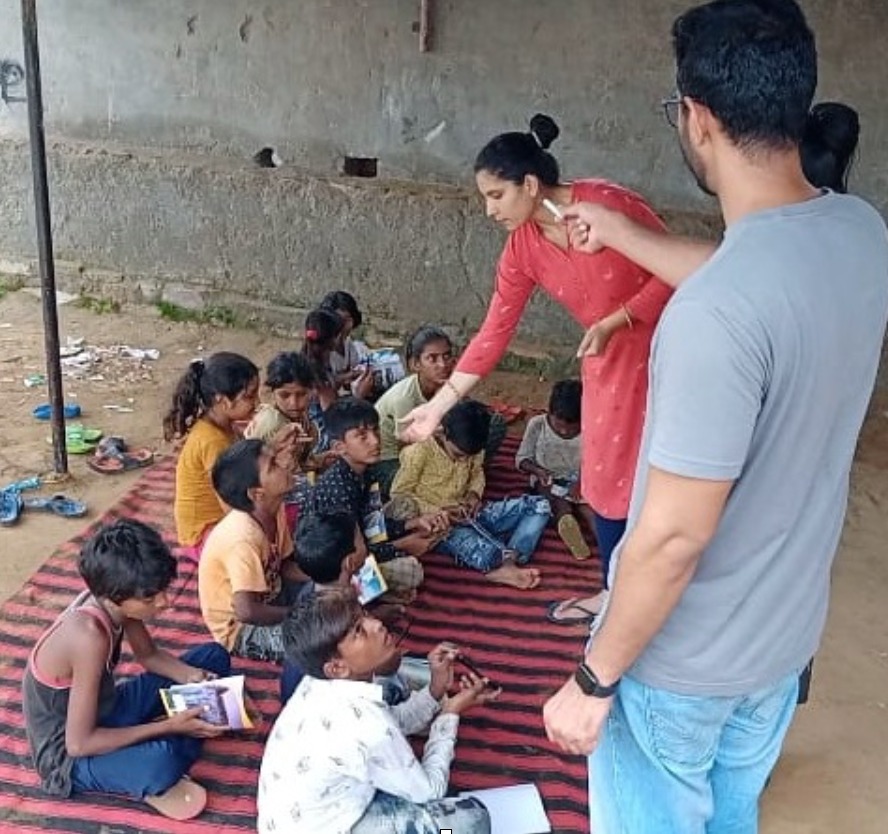 The following year these children shifted to a different slum, but Bhunesh continued to teach them. It wasn’t just the two kids anymore. Bhunesh had enrolled 15 students in school. He even took out a loan of 1.5 lakhs and enrolled 40 kids in school by way of “the Right to Education” of which 15 of them were enrolled at a private school. More and more parents approached Bhunesh to enroll their children in school. But clearly, the loan option was not feasible or sustainable in the long run, Bhunesh thought. It was then that the seed of Smile for All was planted in February of 2019. His wife and he dedicatedly spend their evenings teaching kids from slums and the homeless. Many of these students come home to Neha so she can teach them. At one point she had 80 students at her residence!

Setting up an NGO and one with such a massive vision is not without challenges. Bhunesh says, “Many parents are reluctant to send their children as they were concerned about fake NGOs who lure the children in with promises of education and then traffic them or train them to beg. Their concerns were genuine as the world is a scary place especially for the less fortunate.” So Bhunesh and Neha took the classes to them and taught the children in the slums where the parents could be at ease.

Contrary to what Indians are made to believe there are many families without an Aadhar card. Smile for All also aids in getting families registered on the Aadhar portal as without an Aadhar Card admission to any school is not permitted by law. It is all part and parcel of ensuring the child is enrolled in school.

And let us not forget that it is not just fees that one needs funds for. The school uniform, books, stationary, all are expenses too. This part of the expense is mainly passed along to the parents as they too should take some responsibility. However, for those parents who genuinely cannot spare money for these items, Smile for All takes on the responsibility.

By 2019 Smile for All had a total of 100 kids enrolled in school. Negotiating fees with schools and bringing them to the agreement to accept students from the lower start of society became a priority. How would one of your children feel if they had to go to school with a child from the slums?

Exactly, kids can be ruthless if they are not guided! Many schools would not even accept kids belonging to a family below the middle class. Bullying is rampant, Bhunesh explains and this is where we are now branching into grooming and improving their standard of living. The parents too are made to understand the importance of their children getting an education. But Bhunesh and Neha are not alone. They are supported in their mission by 4000 volunteers across the country and Bangladesh who are training the next generation. 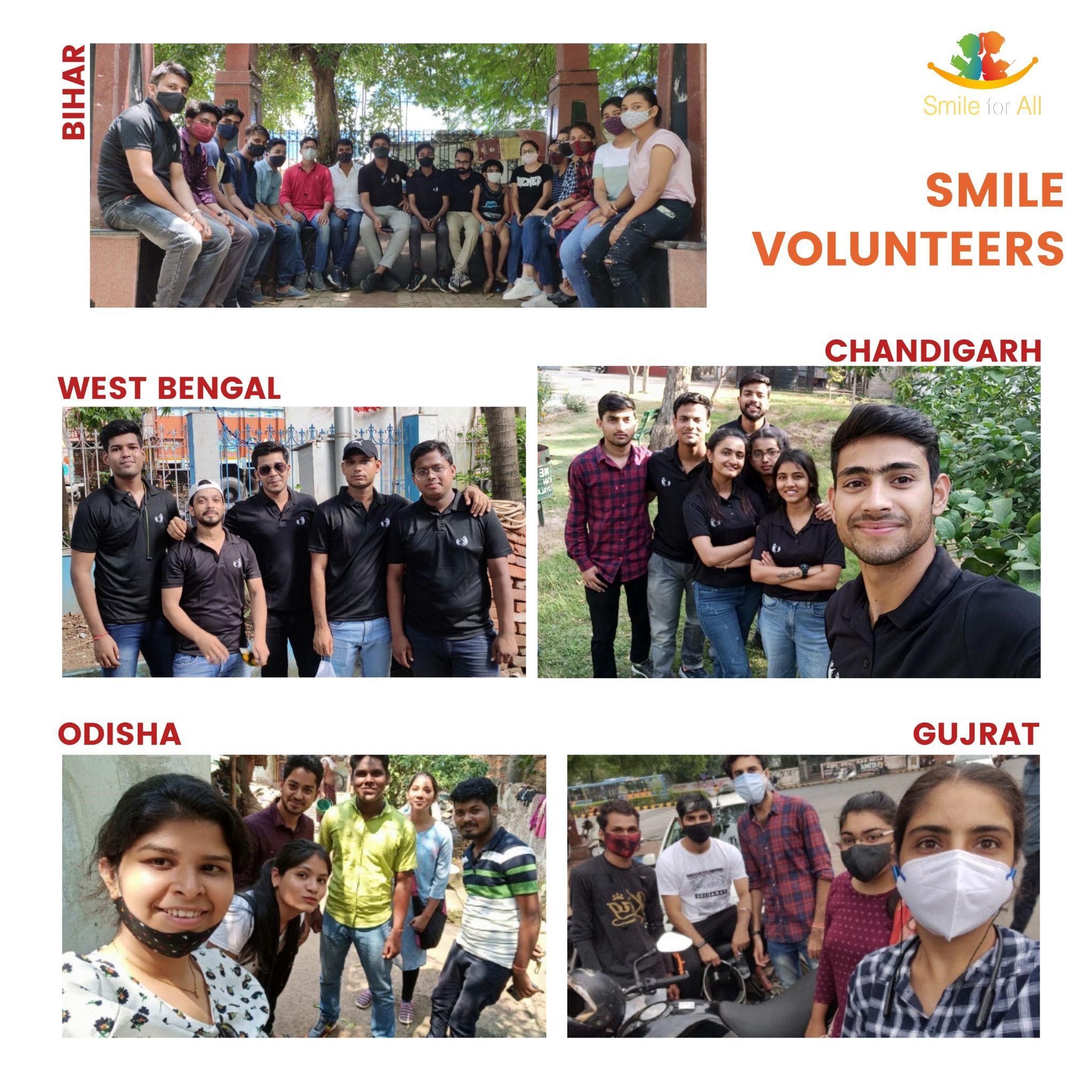 They apply through the online form on the SFA website following which they are put through a rigorous interview process. They are appointed in 3 tiers- a volunteer, a city leader, and a state leader. They must adopt the mission and vision and work on fostering their network and clubs. All of it is voluntary which is what makes the organization extraordinary. The World Bank data puts India’s poverty rate at 22%. The only way to mitigate this is to provide children with quality education. Smile for All is working to increase literacy nationally and internationally.

A brainstorming session led to the birth of another brilliant idea within the SFA label- Happiness Subscription- where people could sponsor a child’s education by giving up a pizza every month! 600+ Happiness Subscribers joined the movement and have been consistently receiving information about the child’s education. The dropout rate amongst the subscribers is less than 5%.

If we are earning and can afford a pizza, we certainly can afford to pay for a child’s education. And Smile For All looks at it as an investment into the future of the world. Every educated child is a window to the world.

“There is still a lot that needs to be done. We have helped quite a few children, but something tells me that more needs to be done before I can claim that I am satisfied with what Smile for All has been able to accomplish. The kids I see sleeping on footpaths and flyovers are a constant reminder that we still have a long way to go,” says Co-Founder Neha. It all starts with a story, something that pokes you to think beyond one’s comfort bubble. Smile for All is Bhunesh and Neha’s recognition of what drives them and the 4000+ volunteers and Happiness Subscribers every step of the way.

“I want to enroll 10 million children into school in the next 5 years. Our commitment to transparency and our Happiness Subscription program will help us realize our dream,” asserts Bhunesh.